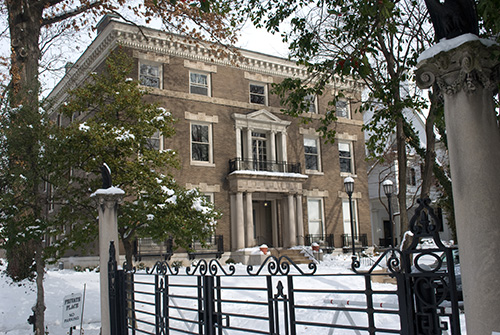 There have been several developments of note at 4969. Starting at the bottom, we have a new caretaker living in the basement apartment, Keith Eckenfels, who has taken great interest in maintaining the place as Uncle Polky would have desired. He has enthusiasm and initiative as well a know-how in upkeep – including painting, plastering, carpentry, minor electrical repairs, grounds-keeping, to name but a few areas. This has made the job that Jennie and I have done much easier. Here are a few of the jobs we have tackled.

In addition to all the above, Keith has taken over the routine lawn care, leaf removal, snow shoveling, house cleaning, vacuuming, and trash/recycling for the building. If this isn’t enough, Keith, as many of the St Louisans know, is an expert party server, and in this capacity has worked for our tenants when they entertain.

To sum up, Keith has made it feasible for us to maintain Chambers’ Chamber. If in the vicinity, have a look around, say hello, and give a ‘thank you’ for all of us to Keith.

On the first floor, Mary Hall continues her occupancy, having just celebrated her 100th birthday (!) at a bash at her niece’s – Anne Taussig and Marc Bush – on Westmoreland Place a couple of weeks ago. Several of the clan members attended, including the Laws and the Dunns. A host of Central West Enders gathered for the event. Mary’s granddaughter C.C. Thompkins lives with Mary at 4969 and assists with her ADLs. We have done some re-wiring, replacement of track lighting in Mary’s unit in 2010.

On the second floor, Bobby and Mary Dunn moved out early last year, and we are fortunate since May to have Herb and Marcia Smith occupying this unit. Marcia is an interior designer and immediately saw the charm of the building. The Smiths had built and occupied the wonderful modern home on Lindell west of the Jefferson Memorial. We decided to place a walk-in shower in the east bathroom for the Smiths which is much more functional for older renters and which will enhance re-sale value of the building when it comes time. Mike Brunstrom, the carpenter, did a beautiful job with this, maintaining the character of the house in his work.

Rev Michael Randolph and his wife Pat Cleary left the third floor after a 5 year stay as of Jan 1st 2011, so this unit is now up for lease. We have had moderate interest in the unit – several viewers each week – after placing ads in the West End Word and on Craigslist. We are asking $2100/mo and hope to get it leased as soon as possible.

To date we have a comfortable balance on our 4969 account despite having had the second floor empty last year until May and having the third floor vacant Jan till March of this year.

For questions about the grand old house call/email the Chamberlain. You know where to find him!