This Thanksgiving was special. For several years Will Cromie, Bill Skinner and Sarah Dunn, among others, have wanted an up-to-date survey and aerial photo of Moone Athy. Mark Ditch, whose family surveying firm had done work for us in the past, this fall finished a several year effort to get our corners staked and lines surveyed. For Thanksgiving, appropriately enough, Sarah and he presented a framed, demarcated aerial photograph of Moone Athy Farm to the gathered family – with a challenge! First though, the aerial: 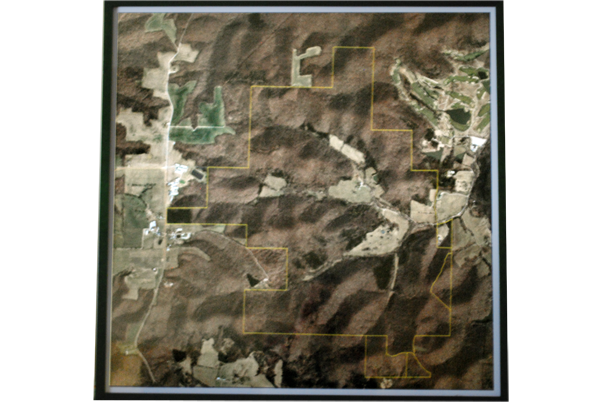 Given the ungovernable competitiveness inherent in the Chamber’s genome you knew this was coming.

In a push to introduce the farm beyond the kitchen and hearth to the youth (defined loosely) of the family, the management is sponsoring a contest, ending next Thanksgiving 2014 between two teams of family members, the Delta Force vs the Green Berets. To date Isabel Smith, Trey and Helene Tatum, Davey Pentland, Jack McClelland, and Peter Smith are all Green Berets, while Hugh Law, Bobby and Mary Dunn, Eddie and Lory Fehlig are known members of the Delta Force. For those wishing to enlist, pick a team. Spare maps are on hand on the piano at Moone Athy. A compass will be a must – cell phone apps are very handy. GPS coordinates may prove vital in closely contested and disputed claims so think about adding that data to your photo submission. Be sure the Chamberlain knows which team you are on so we can keep numbers balanced, and email me if you’d like to join up.

You will note on these photographs the farm boundaries are outlined in yellow. There are 32 corners. These have been marked by Sarah, Neal Fuhr and David Pentland with the letters “A” – “Z”, and then for corners 27 – 32, the numerals “1” – “6”. The image below shows the start point (red arrow) and the transition from letters to numbers (green arrow), with the direction of labeling being clockwise. Of course you can start anywhere you please. 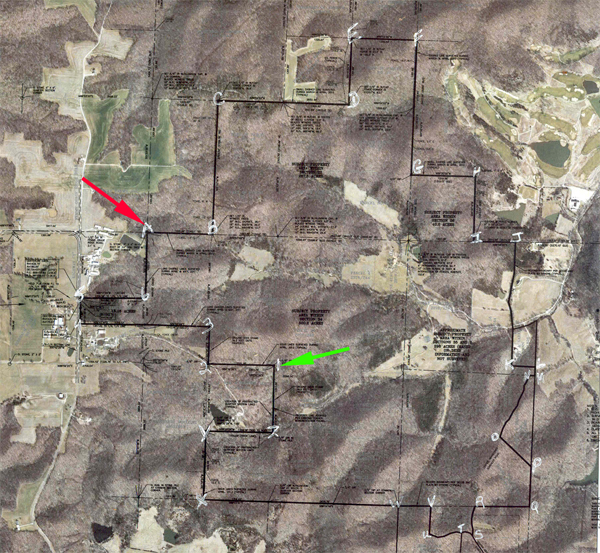 As of this writing Isabel Smith and Trey Tatum (Green Berets) have taken the lead, having identified corners “K”, “N”, “M” and “J”. Delta Force, close behind, has identified “K”, “M” and “N”.

Several points to keep in mind. Farmers in the old days ran pigs and cattle through the woods. Hence you will come across barbed wire in the brush. It can be a good guide to corners – but not always. Be careful not to become caught up in it. Take a picture of your identified corner and email it to me (Chamberlain@ourrumpus.com), with the letter/number on it clearly visible. The corners are all T-posts (iron posts about 5′ high) with a yellow cap on top and a letter/number wired onto it. See pictures below.Some T-posts with caps are way points rather than corners – only capped T-posts with a letter or number are genuine corners. The true corners always have some other marker – an old iron pipe or marked rock (e.g. “G” corner has a carved rock at its base.). Anyone (attention Iowans!) found removing corner markings to throw off competitors will be disqualified summarily and publicly outed on these pages. Finally, avoid exploring during deer and turkey hunting seasons (click here for listings). 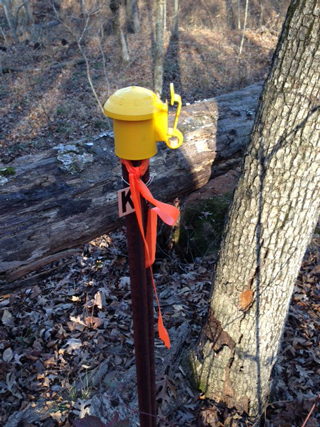 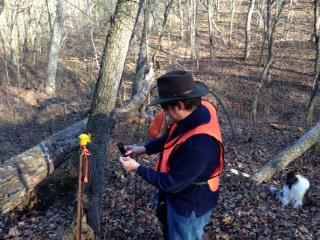 Speaking of hunting, can anyone guess where these gobblers were photographed???? 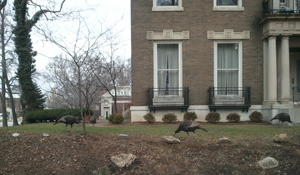 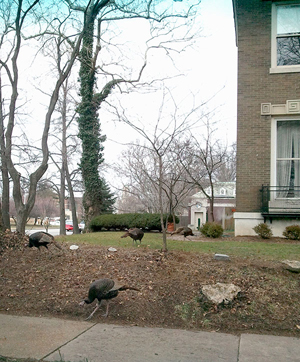 Looking at that map, we do have so much to be thankful for, don’t we?

Misty May Ain’t In It

Filed under: Family Contests,Vacation — Chamberlain @ 12:32 am

In an attempt to elicit clan participation in sending photos/videos/texts describing their summer activities, I’m submitting this unabashedly self-congratulatory video of one of our Olympian contenders competing in the Bucking Surf Board Category for 3 year olds. I’m sure you can provide something similar if not quite as amazing as Margaret Smith’s performance shown below…

To give a little more assistance to those struggling with our botanical quiz, here’s a photo of the plant which you can now click on for a bigger view. Also the location of the specimen has not yet been identified… 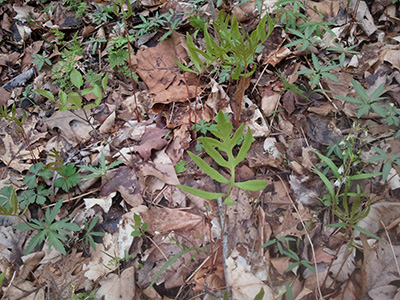 Mother Nature struck Moone Athy yesterday at 5:00 AM. There was a huge storm and a torrential 30 minute downpour, with incredible flash flooding. I have startling photos on my cell phone which, unfortunately, is malfunctioning. I am trying to resuscitate it – if successful these will be posted.

First, the long anticipated Farm Vehicle Policy is out. This anxiously awaited must-read can be found in the Library section of our sidebar, under ‘Policy’ (see below). 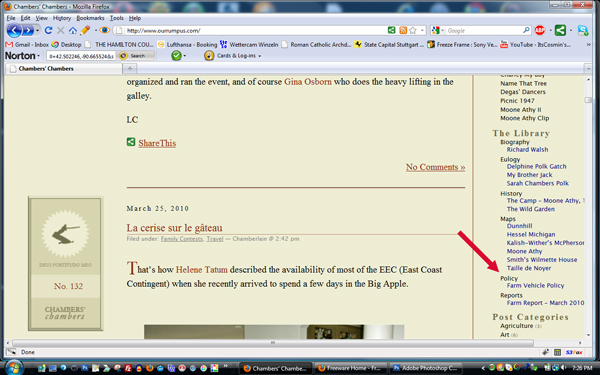 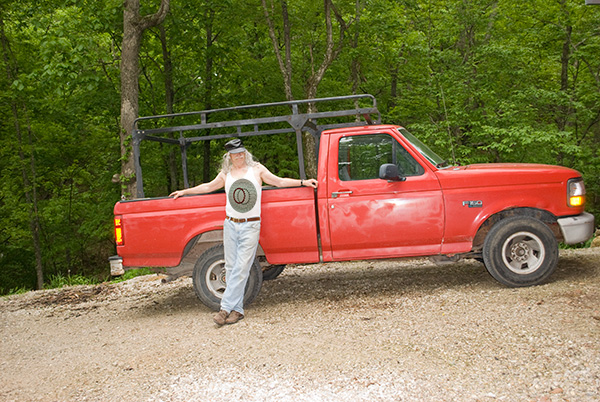 Note – Burnell sports the EMpattern Tee-Shirt awarded the clan member with the best caption for our contest. Bet you wish you’d entered! Click on the image to see a blow up of the design…. If you would like one of these shirts, contact the Chamberlain for pricing. They go quickly, especially the wife-beater style shown above.

That’s how Helene Tatum described the availability of most of the EEC (East Coast Contingent) when she recently arrived to spend a few days in the Big Apple. 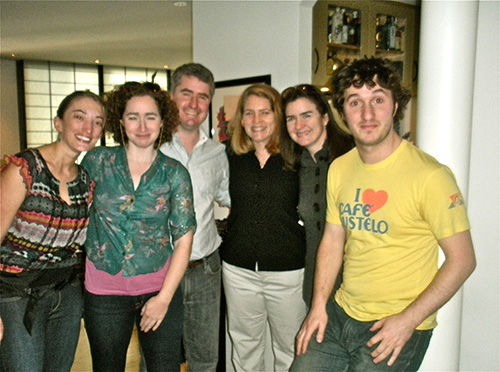 If I didn’t know better I’d say this crowd has a “caught red handed” look, wouldn’t you? What do you suppose have they’ve been up to? This photo is crying for captions – if your suggestion wins the ECC Caption Contest, an OurRumpus Tee Shirt is yours. Deadline for submissions: April 15, 2010.

Missing in action is our favorite representative from Paul, Weiss, Rifkind, Wharton & Garrison LLP. Visiting clients in the Caribbean perhaps? 🙄