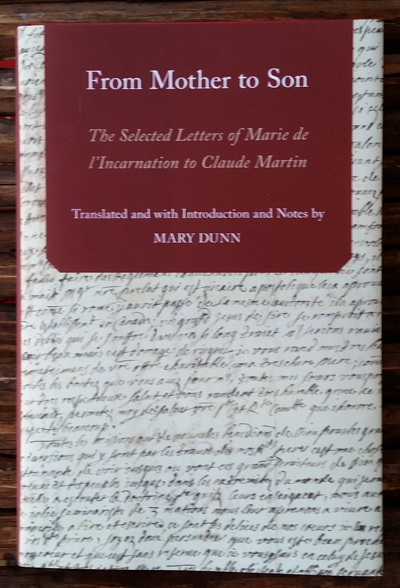 The family printing presses continue to roll. Our newest book is From Mother to Son, the Selected Letters of Marie de l’Incarnation to Claude Martin, by Mary Dunn, Oxford University Press, ISBN 978-0-19-938657-4, 2014. This publication is part of the Oxford series ‘Religions in Translation’, Anne Monius, Harvard Divinity School, series editor.

Mary Dunn’s achievement has family relevance on a number of levels. First, those of you who have been involved in the yearlong St Louis 250th Anniversary celebrations are aware of its explicit historical thrust to highlight, as Mary states, a French “counterpoint to the narrative weighted in favor of Plymouth Rock and the Puritans.” Mary’s Chouteau ancestry no doubt plays a role in her interest in the French perspective. Second, this book adds to the family’s existing scholarship on the history of New France (see posting #44, the Upper Country, a book by Claiborne Skinner).

From the dust jacket:

“This truly extraordinary collection of letters between Marie de l’Incarnation and her son Claude Martin, could not have been curated, translated, and introduced to the English-speaking world more expertly. Dunn’s introduction is brilliant, promoting a richer awareness of how mystical journeys are deeply enmeshed in earthly relationships – in this case, relationships between France and the New World, Catholics and Iroquois, and most provocatively and indeed startlingly, between a mother and the son she abandons…” Brenna Moore, author of RaÃ¯ssa Maritain, the Allure of Suffering, and the French Catholic Revival (1905-1945).

For those of us educated by the les Mesdames du Sacre Coeur, early grade school descriptions of the torture of the French Jesuits by the Iroquois remain deeply imprinted in memory. Marie’s correspondence with her son will bring back these memories in vivid detail.

We are accumulating quite a collection of books by family members. On art and architecture we have Four Emperors and an Architect by Alicia Salter. In North American history we have the aforementioned The Upper Country by Claiborne Skinner. Recent St Louis history and pop culture is the subject of Tom Dunn’s Admiral, and now we add religious history to the mix. Ideal gifts for friends and relatives to keep in mind at Christmastime.