Here’s our annual 4th of July update from the Kalish family to the Chamber-at-Large, thanks to Eleanor! 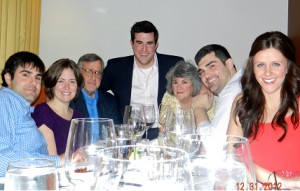 “We hope that this finds you healthy, in good spirits
and enjoying a splendid summer.

GRAHAM, as a specialty retail store bear, continues to market Build-A-Bear Workshop specialty stores, â€œthe leading and only global company that offers an interactive make-your-own stuffed animal retail-entertainment experience.â€ Joining two of his high school classmates, he moved into a large bachelor pad apartment in an historic building adjacent to Forest Park. Graham celebrated his 25th birthday with family and high school friends in Chicago with many epicurean delights, trips to the top of the Willis and Hancock buildings, and the Shedd Aquarium. Down the road, Graham is contemplating the leap to graduate school for a masters in entrepreneurship and would be happy to share (gwk4588@gmail.com) his preferred programs to see if you have any insights, connections to admission offices or alumni at:

POWELL juggles his job at Hilliker Corporation and the expansion of Crushed Red. Working with Ralph and their partner, Chris LaRocca, they opened their second store this spring in Kirkwood, MO, and are working on more down the line. Powell successfully launched a â€œyoung friendsâ€ support group for St. Lukeâ€™s hospital. After three and a half years living in his downtown loft with two roommates, Powell is putting it on the market and house hunting. He just celebrated his one-year with his lovely girlfriend Danielle Ruest; who like no one before, has been able to keep him in check.

MANNING and Mel (Mary Elliott McKetta) are doing quite well down in Austin. Mel is clerking for the Travis County probate judge. Manning has been substitute teaching in the Austin Independent School District and studying statistics (for some percentage of the time). Manning will apply to graduate programs that combine law and policy this fall for the following year. Currently they are in South America, exploring Peru, Chile, and Colombia. When not stirring up international mayhem they enjoy cooking, Formula 1 racing, exploring and re-exploring Austin, and making fun of their dog Oogie (who doesnâ€™t understand but smiles and slobbers just the same).

ELEANOR became a docent for the newly renovated Central Library. The Beaux Arts library originally completed in 1911 and designed by Cass Gilbert offers complimentary tours on Mondays and Saturdays. She continues to be a volunteer (now called â€œDestination Specialistâ€) at the airport and whenever possible the Forest Park Visitors Centers on behalf of the CVC (ST. Louis Convention & Visitors Commission). In that capacity, Eleanor had the opportunity for an â€œup close and Personalâ€ experience with Solar Impulse (www.solarimpulse.com) when it stopped in St. Louis on its trans-America flight. She persuaded the Kalishmen to join her for another viewing a couple of days later. Learning Portuguese has taken a hiatus during the warmer months but is no less interesting. Eleanorâ€™s high school class has initiated quarterly gatherings in the past year+ with the wonderful effect of re-newing old friendships and â€œnewingâ€ new ones.

RALPH continues his law practice with Husch Blackwell, which has changed in two respects. The firm has reorganized its attorneys into industry groups such that Ralph is â€“ presto â€“ a Food & Ag lawyer. Also, the firm extended its reach by merging with a 65 lawyer Texas firm, happily with an office in Austin to facilitate trips there to see sweet Mel and not as sweet Manning. Through the kind and loving direction of Bobby Miller, a lost but recovered dear friend from grammar school and a theatrical genius, Ralph performed again in a â€œnew and Improvedâ€ production of Branch Rickey for six nights at the Gaslight Theater in STL. Ralph was humbled by the kindness of family and friends coming into town from the west, south and east coasts to see the play. Ralph loves working with Powell on Crushed Red (see Powellâ€™s blurb). Ralph had a bike accident, on June 1 breaking his clavicle. This incident underscores Ralphâ€™s commitment to St. Lukeâ€™s Hospital, where he was treated for his injury and where he completed his two-year term as President of Friends of St. Lukeâ€™s and beat the fundraising goal by a generous amount. Ralph & Eleanor hosted Ralphâ€™s high school classâ€™ 45th reunion, proving the old Sophocles adage: â€œA man growing old becomes a child again.â€
With several short trips â€“ southern California, Chicago and New York behind us and a few more in front of us, we are particularly looking forward to a family trip to Lake Tahoe later this month for some much needed catch-up time with Manning. We plan to bike, kayak (Ralph wonâ€™t be able to yet), eat, play, hike and relax.

It is with profound sadness that we had to euthanize our beloved dog Petey in early May; we miss her terribly.

What with weddings, a brand new Muscovite, and much happening at Moone Athy we have a lot to report in the next few weeks. Stay tuned!

Might as well end up with a total non-sequitur. Here’s a link to an hilarious narrative. It provides an idea as to tuning up our farm septic system. Enjoy!

As an addendum, if anyone of you has an inclination to pitch in on the OurRumpus blogging for the family just let the Chamberlain know. I know several of you have your own blogs – there is not much to it. Or if you’re just interested in learning how, think about joining up…