Thanks to our West Coast correspondent Emily Gatch we have the following byline from Autrans, France. (If the following link doesn’t appear refresh your page please…)

Does this seem far fetched? Not at all. Consider the following post from the Punjapit blog May 2010: 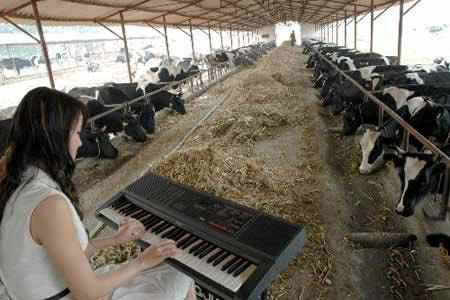 “While it seems incredible to play music to cows, breeder Guo Zhixin actually hires a musician to play music to his dairy cows for one hour every morning, saying beautiful meledies can make his cows produce more milk.”

“Guo, who raises 860 cows on his farm in a village near city Luoyang, central Chinaâ€™s Henan Province, says playing music to cows brings forth one more kilo of milk from every cow, every day, resulting in 700 yuanâ€™s more worth of milk every year, reported chinanews.com on Monday.”

“Guo began offering music sessions for his cows last March, when he learned the idea from a foreign cow magazine.”

We also know that one version of the lyrics of Bessie Smith’s tune Hot time in the Old Town Tonight resulted from Patrick and Catherine O’Leary’s cow kicking over a lantern in her barn resulting in the great Chicago Fire of 1871 (see Wikipedia here). Another Smith, Sarah, of Wilmette Il sings a particularly hot version of this tune…

Hat tip to Emily for her agro-musicological update!