Here are updates regarding the Chambers/Mullanphy tribes that you may find of interest. First, the Fourth International Reunion of the Ã“ Maolanfaidh extended family is being held this June in London Ontario. Here is Ninian Mellamphy’s announcement of the event – I am remiss in not posting this earlier:

I thought that the Feast of all Saints would be an ideal day to write a note of invitation to the fourth international reunion of the Ã“ Maolanfaidh family, which will take place in London, Ontario, Canada on the first weekend of June, 2011 (June 3-6).

Many of us will remember that one of the first of our namesakes to be mentioned in early medieval documents was the founder of a seventh-century monastery at the mouth of the Blackwater river in Ireland (near modern Youghal, Co. Cork) and was venerated as Saint Maolanfaidh. God knows how many of usâ€”Malamphys, Molamphys, Molanphys, Melanphys, Mullamphys, Molumphys and at least 30 other English-language derivatives of the Irish nameâ€”claim direct descent from him.

The three earlier reunions took place in Frederick, Maryland (2001), the next at Coolbawn Quay, County Tipperary (2005), the third in Waiheke Island, New Zealand (2008) and all three were happy gatherings of people from various parts of Ireland, England, Australia, New Zealand, as well the USA and Canada. We look forward to meeting additional cousins from South America and, letâ€™s hope, South Africa, as well as the old reliables.

Please find attached a proposed plan for the activities of the weekendâ€”a plan that is very preliminary indeed. In the weeks and months ahead we look forward to getting suggestions from you about events and activities you might like to have added.

In order to help us develop plans for the reunion, would you be so kind as to let me know by Christmas if you are tempted be here in June â€“ or by the feast of Saint Maolanfaidh, January 30,
at the latest?

If any OurRumpians are interested in attending this event contract me here and I will forward current lodging information that Ninian has sent us. This sounds like a very well organized outing that would be fun for the genealogists amongst us.

In similar vein, Jennie Quick has forwarded a fascinating link that provides family history about the Charles Chambers and John Mullanphy families. It appears in the July 1908 edition of The Messenger, page 59, which can be accessed here. The title page of this Fordham University publication is shown below. 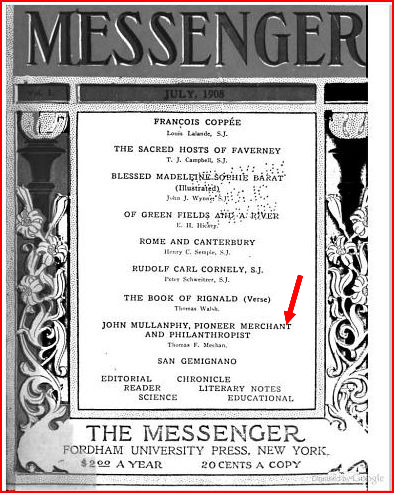