An exuberant 4th of July Greetings and family update to the Chamberfolk from the Kalish-Withers contingent. 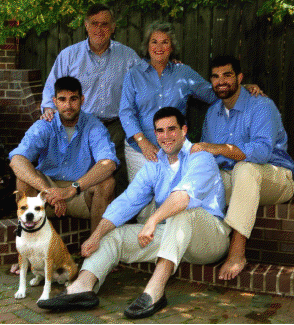 From
the Kalish & Withers clan

We hope that this finds you healthy and in good spirits.

Graham turned 22 in April, while his Semester at SeaÂ® ship was docked in Capetown, South Africa.  On January 17th, the ship departed from Ensanada, Mexico and after visiting 13 ports of Call and with a  refueling stop in Singapore, the ship returned to the U.S. arriving on may 5th at Fort Lauderdale.  With 26,002 nautical miles under his belt,a lifetime of memories and a passel of new friends, Graham is ready to stay Stateside for a while. He began a summer internship with Build-a–Bear WorkshopÂ® on June 7th.  This will take him right up to the start of his Senior year at the University of Georgia, where he is majoring in marketing with a minor in sociology.

Powell turned 25 in April, with a surprise party held at home.  He is working for
Hilliker Corporation, a commercial and industrial real estate company in St. Louis, working on a number  of deals.  In January, he moved into his two story condominium downtown loft, which he shares with one of his very best friends from high school and another friend whom he met during college.

Manning turned 28 in June,  He is a Captain in the Army, currently serving as Commanding Officer of HHC, 2-30 IN, 4 10th Mountain Division at Ft. Polk, LA.  He will commence Captainsâ€˜ Military Intelligence School at Fort Huachuca, AZ in  mid-July.

Eleanor continues volunteering with the St. Louis Convention & Visitor Commission,at the airportâ€™s Terminal1 and Forest Park.  A permanent shift has become available with more to follow, hopefully. Her still very active  mother turned 90 in April with a quiet celebration.

Ralph is finishing his two year position as President of  the Board of Central Institute for the Deaf and continues working on the Board of the Friends of St. Lukeâ€™s Hospital.  Ralph just made his first presentation as Branch Rickey at a birthday party for his sister, Karen,  at the end of May and completed a triathlon on Fatherâ€™s Day.

We all hope that you have a wonderful summer filled with laughter, liberty, good food, games outside, walks on a beach, swims in a lake, and beautiful sunsets.

With love from Graham,Powell, Manning, Eleanor and Ralph

Thanks to Aunt Eleanor for including us in her update, and congratulations to all the K-W family – especially Great Aunt Alicia. More updates/kudos in the works !