To alleviate our winter doldrums – even though, officially, it’s only been winter for a couple of weeks – here is a superb and reinvigorating piece by Emily Gatch. This is an engaging educational article on the Southern Kitchen Garden. It was written a few years back by Emily for the Seeds of Change eNewsletter.

Kitchen Gardening in the South 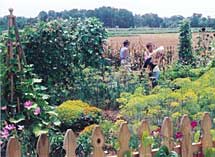 When I first moved from the flatlands of central Iowa to the cotton country of west Tennessee, I acquainted myself with the new terrain by driving the back roads of Madison County, fixing to get lost. It wasn’t hard to do, and on one memorable Saturday in October I pulled off the road to figure out where I was. I had parked near an old house with a long porch hung with ferns. The divide between inside and outside seemed blurred; a few cars rusting in the yard looked like they might be about to head in for supper. I observed the late-summer remains of a vegetable garden nearby, with a row of okra that had been stripped up to nearly the top of the plants, leaving comical stalks with “hairdos” of okra pods. The bright yellow leaves of a tulip poplar in the yard demanded my admiring gaze, as did the kudzu vine slowly overtaking a telephone pole. As I assessed the scene, a thought occurred to me: this is my kind of landscape, so these must be my kind of people.

Where I grew up in Iowa, the influence of Germanic settlers and their reverence for tidiness can be observed in lawns and gardens that have been clipped and trimmed and mown into subservience. Hedge-trimmers and weed-whackers find their highest calling in the hands of my people. I hadn’t realized it, but my eyes were craving the disorderly whimsy so often on display in a true Southern gardenâ€”a hot, green jungle where the artistic possibilities of an old sink, discarded hubcaps, and even the common pink flamingo are explored. These elements provide an enchanting backdrop for the stars of the Southern garden: the vegetables (you’ll notice I’m biased). The following are some highlights of my encounters with kitchen gardens in the South, with a caveat: as my colleagues at the West Tennessee Agricultural Experiment Station repeatedly reminded me, I am a Yankee outsider, and my opinions must therefore be considered somewhat suspect.

Peas: A great place to start since we’ve just planted thirty varieties to trial at the Seeds of Change Research Farm. To non-southerners, there’s one basic kind of pea, or three if you’re really breaking it down: shell, snap, and snow peas. In the South, these would all be classified as “English” peas (Pisum sativum) to distinguish them from southern peas (Vigna unguiculata), which in some parts of the world are called cowpeas. Are you thoroughly confused? Southern peas are a warm-season crop that includes black-eyed peas, crowder peas, pink-eyed purple-hulled peas, lady or cream peas, and an older speckled variety referred to as “whipporwills.” Southern peas only vaguely resemble English peas in growth, appearance, and taste. They are planted later in the spring, usually in late May, and bear in the heat of mid to late summer. They have a low, sprawling growth habit and long, tough pods that must be split by hand or with a pea-sheller to yield fresh, tender peas that are boiled up with a bit of fat-back. We’re excited to trial two southern peas (a crowder pea and another called “Red Ripper”) this summer at our Seeds of Change Research Farm. Keep an eye out for them in future catalogs!

Greens: These are the accompaniment, in boiled format, to a wedge of fresh cornbread. This category includes turnip greens, mustard greens, collard greens, and kaleâ€”all members of the same family (Brassicaceae) as broccoli and cabbage. Turnip greens are typically planted in late August, whereas collards, mustard greens, and kale are planted as spring crops in late March. The seed is sown in large beds rather than rows, and the leaves are harvested continuously throughout the cool spring or fall weather. Flea beetles are occasionally a problem, for which any commercial Neem oil product can be used as an organic control. An interesting note: the flavorful juice left over after boiling up a mess of greens is referred to as “pot liquor,” which is sopped up with cornbread and savored.

Okra: The vegetable non-southerners love to hate, presumably for the mucilaginous nature it develops when cooked. Okra (Abelmoschus esculentus) is truly a fascinating plant, brought over from Africa by slaves and cultivated in southern gardens ever since. A relative of cotton and hibiscus, okra looks like nothing else in the vegetable garden. It boasts attractive white flowers, large and deeply lobed leaves, and heights of six to seven feet. Okra may be direct seeded in warm climates, but should be started inside several weeks before the frost-free date in northern zones. Tiny, irritating spines make long-sleeves a necessity during harvest, which should occur when pods are about two inches in length. “Mammoth Spineless” is a variety to consider for an itch-free harvest, and “Red Velvet” for its stunning scarlet pods. Both varieties are available from Seeds of Change.

Watermelons: Nicely chilled on a hot August day, and a fixture of life below the Mason-Dixon Line; a clichÃ©, in fact. Another African native (Citrullus lanatus), this relative of squash and melons requires a long, hot growing season, limited irrigation to heighten sweetness, and a willingness on behalf of the grower to sift through numerous theories and tales about when they’re ready for harvest. My personal favorite is that a watermelon is ready when the tendril next to the leaf closest to the melon shrivels and turns yellow. “Crimson Sweet” is a preferred southern variety (available through Seeds of Change). For novelty, we suggest the delightfully spotty heirloom “Moon and Stars,” it never fails to stop people in their tracks.

Sweet potatoes: Not just a Thanksgiving ritual but a beloved autumn treat. The potato we know best is called the “Irish” potato (Solanum tuberosum) to distinguish it from the sweet. Sweet potatoes are a relative of the common morning glory, with whom they share the genus Ipomoea and the same vigorous vining tendency. Sweet potatoes are planted as rooted stem cuttings called “slips,” and require a long growing season (up to 140 days), deep and preferably sandy soil, and minimal irrigation after initial establishment. They must be harvested before the first frost, so sweet-potato growers listen carefully to weather forecasts in October. The most common varieties are Beauregard, an early variety, Jewel, Centennial, and Vardaman, the latter displaying beautiful purple leaves.

In Harper Lee’s To Kill a Mockingbird, Mayella Ewell lovingly tends several red geraniums in chipped-enamel slop jars in the middle of a junk-strewn yard. She’s as good a muse as any for considering the finer points of design in a Southern kitchen garden, one of which must certainly be that plant containers are everywhere, if you keep an open mind and eye. Hang on to those old bowling shoes; renowned Mississippi horticulturist Felder Rushing houses several sedum plants in his. Chicken feeders make an excellent trough-style planter, as do those brightly-colored 1960s-era suitcases found in every thrift shop. The possibilities are endlessâ€”just don’t forget to add drainage holes.

Old Granny and Aunt Delphine’s love of gardening has clearly taken root in the next generation. They would take great pleasure – as do we all – in Emily’s accomplishments.
What a delightful commentary. Thanks Emily!