Filed under: Family Updates,Travel — Chamberlain @ 11:12 am

Keeping up with Katherine Law (KUKL) Part I

As you may know, Katherine is studying Mandarin in China and is keeping family appraised of her doings. Here is what she writes:

“Hello, all is well here in China, I’m settling down to the life of a student in the dorms, with dictionaries, calligraphy books, internet connection, tea pots and water bottles, food, room, subway and Id cards. I am having a wonderful time and am making progress with my Chinese.

Anne Mao and Gu, Qun’s friends and Virginia Moore helped introduce me to China. Lunch and breakfast with Virginia from restaurants with wonderful river views: the barge traffic waiting to take advantage of the tide and then the river is full of barges with the ferry weaving in and out between. Huge cranes such as Virginia and Mark use working their way up river.

Anne and Gu took me to Pudong and we arrived just as a storm was threatening: skyscrapers against a matte gray sky, just glittering….hours in the shanghai art museum-just fabulous.

I have visited Tian’an men square, the Forbidden City with its outstanding palace museum, a taoist temple with priests chanting. Just wonderful and then walking the streets and seeing wonderful sights, people out dancing to music set up in a park, exercising, playing cards, making wonderful flowers and birds out of palm leaves, such as we know for Easter, rows of bicycles outside the subway station, such a good public transport system.”

Here are some of the photos that Katherine has sent: 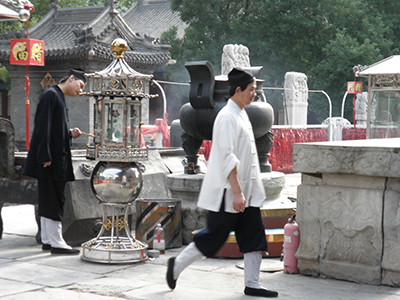 Dongyue temple, Beijing. The Dongyue temple is a Taoist temple and these are priests heading to the altar to chant and play musical instruments, oblivious of the few tourists sightseeing in their temple. The altar is laden with platters of fresh fruit. Several flags flutter displaying the traditional yin-yang symbol. In the courtyard of the temple are numerous rooms, each one representing a Department. 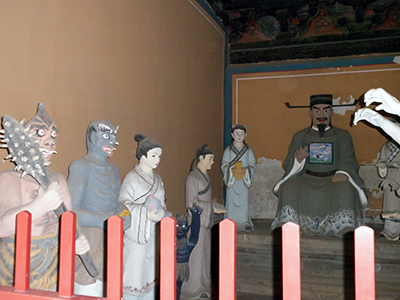 Here is the Department which controls the demons that roam around and makes them behave. One of my friends in Malaysia goes around the world giving Qigong breathing workshops for cancer patients. Qigong breathing has a connection with Daoism. 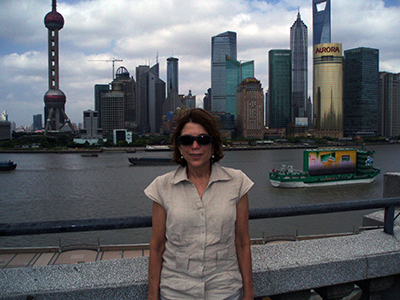 Me on the Bund, Shanghai. This is a wonderful restaurant right on the Bund with terrace seating and surround views of SOME of the skyscrapers in Pudong. The sun is so bright, so one needs to think of bright, bright light hitting the steel frames of these structures. To see what one is taking one has to take cover with an umbrella or big hat, otherwise it is click and shoot. Just imagine Pudong this way: right before a storm gleaming silver structures against a matte gray sky. Absolutely striking. Entrepreneurs are trying to work with some of the old buildings and rehabilitate them. 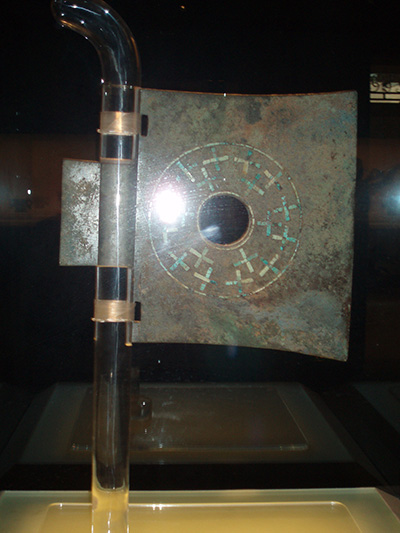 Weapon, Xia dynasty, 1800 +/- BC, Shanghai Art Museum. This is my first-ever viewing of a Xia object. How exciting. It is inlaid with turquoise. The exhibits are arranged by material, so jade, calligraphy, painting, coins, bronzes, porcelain, seals, etc. And within each exhibit one travels through the dynasties viewing just that art form. This time table format of exhibiting is fascinating. One does not have to love what is under one’s eyes as if this is what there is and it is Chinese and so just love it. One has a wealth of objects from each dynasty and one can wait until the jewel appears and then say “Ah, this is the one I love!”

We look forward to further postings from Katherine. She has had difficulty posting to her Ling in China site and for now we will carry her postings…