William Cromie the Younger was recently in St Louis to participate in the Skinner Reunion at Moone Athy. Below he is seen astride the Arabian, Ali. 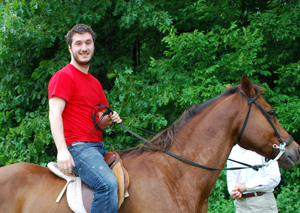 It was great fun to hear about his impressive work in cutting edge web marketing. Will is a co-founder as well as Chief Technology Officer of Nabbr, an online distributor of video/music entertainment content targeting especially Generation Y. Bill’s company advertises for and promotes entertainment talent in cleverly targeted social sites. This maximizes exposure for his clients which include movie studios, TV networks and top record labels, as well as international firms as diverse and reputable as Coca-Cola, Fox News, Honda, and Target, to mention but a few. After seeing what Bill and his firm can deliver it’s easy to understand why the news print industry is struggling. Check out this promotion for TheWhiteTieAffair. Amazing technology.

Here’s the Nabbr synopsis of their offering:

Nabbr is The Gen Y Online Video Network with exclusive video distribution on 400+ social networking â€œresource sitesâ€ 12-34 year olds use to customize their social network profile pages with apps, widgets, backgrounds, etc. Nabbr has 40 Million comScore unique visitors and delivers 300+ Million premium video entertainment content views/month to people actively looking to express themselves and enhance their digital personas. Nabbr delivers all the reach and engagement benefits of social networks with none of the concerns surrounding UGC* and personal pages.

The clan’s cyber presence is assured thanks to Will’s impressive marketing and computer programming talent.

Alphabet Generational concepts may require some remedial work on the part of clan elders. What exactly is Gen-Y? In trying to educate myself I discovered some fascinating family overlaps which you may also find of interest.

First though, a brief chronological primer.

One of the first writers to think in these generational terms was Landon Y Jones, a St Louisan, and a Princeton classmate of Lemoine Skinner III. He coined the term “Baby Boomers” in his book Great Expectations: America and the Baby Boom Generation (1980, New York: Coward, McCann and Geoghegan). Jones went on to have a very successful career at Time Magazine and was considered responsible for considerable growth of it’s popular People Magazine. Another St Louisan, Post Dispatch reporter and friend of Lemoine Skinner Jr, Otto Fuerbringer, had been involved in the creation of People Magazine. They were of course members of The Greatest Generation…