We recently had the sad necessity to report on the death of Pat Horton. At that time we noted that Pat and her husband Don had lived at Moone Athy in the early 1960s. Some months ago Don loaned me a compendium of stories that he has written describing his years as an ironworker, many of them pertaining to his work during the construction of Eero Saarinen’s St Louis Gateway Memorial Arch.

Thanks Don for allowing us to be the first to read this true and hilarious story. 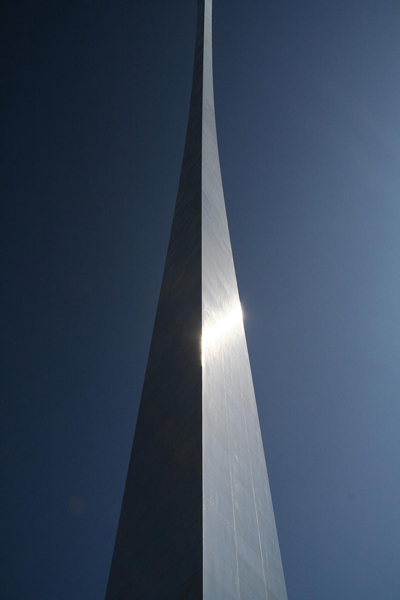 An Ironworker’s Chronicle by Don Horton

For about the past fifty years it has crossed my mind at various times that someone should at least try to chronicle some of the unbelievable, impossible, insane, funny, and sad happenings I’ve seen as an ironworker. In all that time to my knowledge no one has ever done more than an occasional newspaper article on what we do. I would like to change that somewhat. I have a very limited formal education. All the grammatical errors and miscues are mine and mine alone. As you will discover before you read much farther – I’m still an ironworker and will never be much else. That said – if you bear with me, I might still be able to make you laugh a little, learn a little, and maybe the next time you look up at a half finished bridge, high rise or any of the countless other structures where we can be found, and see little ant-like figures skittering around on the iron, it may cross your mind that you’re looking at human beings who live, love, bleed, occasionally attend church, and have kids who may sit alongside yours in school…

Excerpt III – Fly Me to the Moon –

…A couple of guys who will remain nameless for obvious reasons are the “stars” of this next little tale. After a very hot thirsty day on the job this pair wound up in a honky tonk doing some serious drinking just down the street from the Arch. It was what one called a “Black and Tan Joint”. As many “brothers” as there were whites. Oddly enough, everyone pretty much got along. You need to understand, this was St Louis in the early Sixties. Hell, I guess if you weren’t there, there’s no way you could understand. There were a few confrontations. It had been their bar for probably a hundred years, but it was our Arch and location-wise, it was just too convenient to be ignored. I guess God was in our pocket. Nobody got their throat cut. Anyway this is where the two bandits wound up. Now all would have probably gone down as a quiet night out except for the two very, very out-of-place, slightly inebriated young white ladies that came strolling through the door. It was clear they were lost and it was just dawning on them that they were way, way out of their element. Consequently, when the two ironworkers stepped up to save these two damsels, they were happy to the point of giddiness. They were politely seated with drinks in front of them and two dirty, raggedy blue-eyed, sun-bleached, debonair fellows were doing their best to make them feel welcome.

Seems these two well dressed lovelies had left hubbies and kids for a night out with the girls, innocent enough on the face of it. They’d gotten separated from their pals, and wound up in hell. What happened over the course of the rest of the evening can only be attributed to bad booze, bad judgment and bad company. Things were going along well enough but when the girls found they were in the company of two real live “Arch Animals” things just naturally went into overdrive. One thing led to another and before they knew it the two had consented to a guided midnight tour of the Arch in all its unfinished glory. Everything would 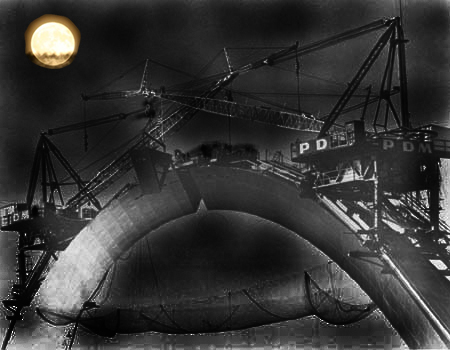 still probably have gone okay, and I wouldn’t be writing about it, had mother nature decided not to be such a bitch.

Now, one of these guys was a natural born “tinker”. Given a little time he could pick locks, jumpstart stuff that was supposed to be tamper proof, and had many other little useful qualities that kept him in and out of hot water over the years. In no time at all he had the elevator gate lock open, the elevator started, and the four of them were blissfully sailing skyward toward the derrick platform and into legend. Each derrick had a little change shanty built under it where we ate our lunch in bad weather, and where there were benches, a table, even a little propane stove for cold weather. A regular little bunk house in the sky it was. No beds, but hell, anybody who could get tamper proof stuff this high off the ground wasn’t going to let the lack of a Serta cramp his style too much.

Things were rollicking right along, the girls were getting over the shock of their elevator ride – not the smoothest ever built, but it got us from point A to point B – usually. Besides where else was ther a view of the city at midnight to compare to this one?

The ladies were still ooohing and aaahing over things never seen before, the guys were plotting their next moves. Nobody was paying any attention to the weather when one of those freaky summer storms crept across the river out of Illinois and slammed into the Arch with everything it had. High winds, hail, sheets of rain, and lightning – bad, bad lightning. High wind and lightning send brave ironworkers to the ground in the middle of the day. This was the “other” middle.

Everybody headed to the elevator as fast as possible in the pitch black. As so often happens with things mechanical, Old Faithful decided this would be a good time to go belly up and refuse to run. Now even the two fearless ironworkers were getting a tad fidgety. The two legs of the Arch before they were stabilized had a funny little way of twisting and swaying in even a moderate wind, and this wind was way past moderate.

They tried to wait it out. The elevator cage had a roof over it but this rain was sideways. They considered their options but there were none. They tried to make jokes, telling the girls there was nothing to worry about. The jokes fell flat. Hard to see the humor when your eyes are being burnt out of your head by lightning flashes and everything you’re touching is a natural conductor of electricity.

Finally, one of the guys decided he would try to walk one of the cross members of the track iron over to the cables that ran down to the drum hoist on the ground. These cables were part of the machinery used to jump (creep) the derrick upward. From there it was a simple matter of sliding down three or four hundred feet of greasy, slimy cable to the ground, finding a phone, and calling someone for help. All this was to be done in a blinding rain storm with the wind trying to blow everything that wasn’t tied down into the “Old Mississip”. The only light he had to see by was the lightning cracking and popping around him and threatening to fry him on the spot.

Well, he did it. Mind you, the people left on top had no way of knowing whether he’d made it or if he was lying at the base of the Arch in a puddle of …well, you know.

Our hero finally found a phone – now, who to call? Careful here, no cops, no firemen. He finally wound up calling his boss, scaring hell out of him but managing to extract a promise to be there as soon as possible. He went back to the base of the Arch to await help and watch the sun come up. By then the storm had blown itself back across the river and it was shaping up to be a beautiful morning. Then he heard a noise and looked up to see the elevator gliding to earth as smooth as could be. At first light the “tinker” had dried a couple of things with someone’s shirt he had found in the shanty, fiddled with this, tweaked that, and got it running as good as new

The elevator touched down just as the boss was pulling up. He piled out of his pick-up with his boots unlaced and his clothes barely on. The boy had hurried only to find four half drowned, hung over derelicts, two of whom had very little to say. The ladies however had plenty to say, none of it good. No stranded elevator, no crisis of any kind, just a couple of filthy red-eyed ironworkers and the remains of what had started out as two fairly attractive women. They were p.o’d, scared, and more than a little worried. Now the foreman wasn’t far behind when it came to the p.o’d part. “You dirty, lousy sons-of-bitches, you’re fired! Say one word and I’ll whip your asses! Get a man out of bed at three in the morning for this kind of mickey-mouse bullshit! You’ll never work this job again, you’ll never work in this city again, just get out of my sight before I kill you both!”

The guilty pair looked at each other and shrugged – “Hey girls, as long as we don’t have to work today, and as long as we’re all four probably looking at divorces, what say we find a nice motel, get cleaned up and start this whole thing all over?” The response was not favorable. “You lousy bastards! Our husbands are going to kill you – our husbands are then going to kill us! Mine’s a city cop, he’ll be looking for you – you better take your boss’s advice and find another state to live in – Ironworkers my ass!” That said, they wobbled off in their water soaked finery, found their car, and were gone in seconds.

Frank and Jesse were left standing in the mud staring glumly at each other when the boss declared “You two asses go get some breakfast and get back here damn quick – we got iron to set!”

“Goddam Red, after what we been through, we need the day off, how about tomorrow?”

“You heard what I said, breakfast, and back here – rapidly – keep running your mouths and you can forget about breakfast!”

That’s the way it went down, no divorces that I know of, nobody got shot and they stayed for pretty much of the duration of the job. They did put a better lock on the elevators – but nothing that the “tinker” couldn’t handle I bet…”

I often think of those two ladies. Just imagine the story they have to tell their grandkids – yeh, right…” 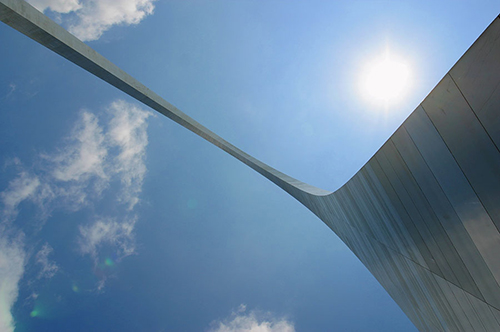 Posted by The Chamberlain (in exile).