Departing Address from The Chamberlain…

“Recent events, many unknown to the family at large, and only superficially touched on in the Comments following our last post, have, I am saddened to say, radically weakened The Chamber, crippling its many activities and threatening even its very survival. Vulgarities, fabrications, brash insubordination, and reckless ambition run unchecked. Newest amongst these outrages we have threats, threats that will not be printed here, but real enough to warrant Radical Measures. To wit:

… he which hath no stomach to this fight,
Let him depart; his passport shall be made,
And crowns for convoy put into his purse;
We would not die in that man’s company
That fears his fellowship to die with us.
This day is call’d the feast of Chamberlain.
He that outlives this day, and comes safe home,
Will stand a tip-toe when this day is nam’d,
And rouse him at the name of Chamberlain.
He that shall live this day, and see old age,
Will yearly on the vigil feast his neighbours,
And say ‘To-morrow is Saint Chamberlain.’
Then will he strip his sleeve and show his scars,
And say ‘These wounds I had on Chamberlain’s day.’
Old men forget; yet all shall be forgot,
But he’ll remember, with advantages,
What feats he did that day. Then shall our names,
Familiar in his mouth as household words…..

I go now, but will return – you will be in my thoughts – until we rumpus again…”

Ms Portobello’s Update:
“What then do we know about this Iowan Cabal? We know that there has been a veritable RumperGate, a break and entry into the Chamber, and theft of The Trophy. In addition, false documents have been placed in such a way as to attract the attention and suspicion of Aunt Sarah, accounting for her unfounded accusations noted in recent Comments. Meanwhile this junta has kept the Trophy moving from place to place in its vain attempt to escape our investigators. To conclude, I now share a recent discovery that perhaps explains the capacity for heinous behavior that we have seen in our (distant) relations. I refer to the treasured Les Trois Mademoiselles (sic – Iowan spelling) portrait of our ancestors. On an anonymous tip, it was suggested that we look at the reverse side of this portrait. The findings were shocking – hover your mouse over the portrait to see for yourself what lurks behind… 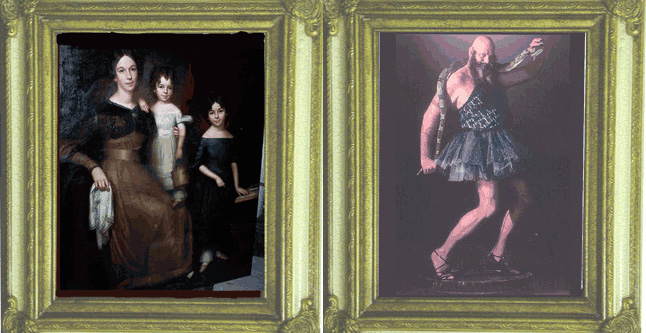 (MOUSE OVER TO SEE BACK OF PORTRAIT)

Eureka, the heretofore unknown progenitor responsible for The Inherited Derangement, long known about (but hidden) by the family. More about him and the Trophy search to follow…”

Respectfully Submitted by Ms Portobello, for the Chamberlain…