Last April we did a posting on the South East Asian explorations of Sarah Porter Law, and thanks to Hugh and Katherine we now have some new images and anecdotes to share, some from Hanoi, Vietnam and others from Malacca, Malaysia.

“To consider for a snapshot posting, herewith a pic 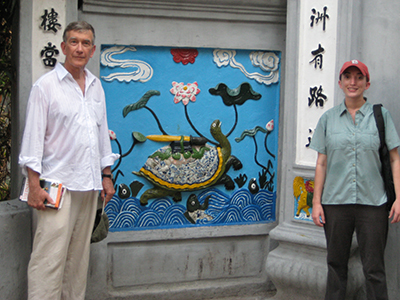 of Sarah and me in early July in Hanoi, by the pagoda on the island on Hoan Kheim (Enchanted Turtle) Lake, in the center of the city, bordering the Old Quarter. There is a legend similar to that of King Arthur and Excalibur, that when the first emperor of Viet Nam was trying to rally the people to throw out the Chinese, after a thousand-year occupation, a turtle rose from the lake to present him with a sword. After he had defeated the Chinese, the emperor and his mandarins were boating in the lake, and the turtle rose again from the water and grabbed the sword back.”

“The turtle is one of the four magical animals that are guardians of Vietnamese temples: dragon, unicorn, turtle and phoenix. 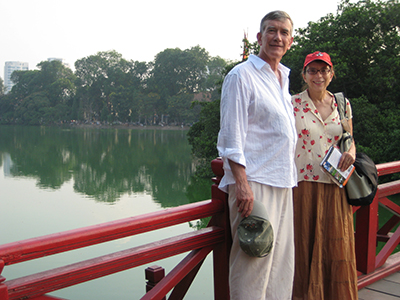 Many temples have pools of live turtles. [Image on left: Katherine and Hugh on bridge to island on Enchanted Turtle Lake, Hanoi, VN] The Temple of Literature in Hanoi, dating to the eleventh century, was once the site of study for candidates for the mandarinate, as well as a shrine for veneration of a semi-deified Confucius. There is a large number of steles with the names of scholars who passed the examinations carved in Chinese characters and resting on large sculpted turtles.”

“… One of the features we most enjoyed in Hanoi was the traditional water puppet show. See this site for a description of the scenes portrayed by the puppeteers: http://www.thingsasian.com/stories-photos/1239. Item 13 (which I could not copy) describes the legend of the restored sword, and item 18 the concluding dance of the four magical animals. The tradition art grew out of rural performances in flooded rice paddies. The puppeteers stand behind a curtain and manipulate the puppets with sticks just under the surface of the pool.”

The next photos from the Laws are from Malacca [map below], a Malay city on the Malaccan Straits trade route where ethnic Chinese have lived and worked for many centuries. 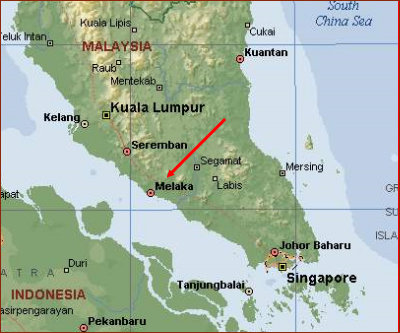 Hugh adds “ The latter looks just like those in Hanoi and Saigon, with joss sticks and prayer cards, but is better kept up….”

A hat tip to Hugh and Katherine for the pictures and updates about Sarah Porter – we hope to see more still!