Our first snapshot of family doings … 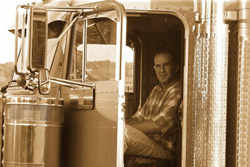 “…today I went to the nursing home in town to visit a neighbor of mine who recently had a stroke. It was harder to see him than I thought it was going to be. The stroke turned off so many connections, it was like meeting and talking to a stranger. Only a few weeks before, he had called me and asked if I would help him on his farm to put a few acres of soybeans in.

(MOUSE OVER FOR CLOSE UP)

He lives in town and to get to his farm he has to cross a river that has really been a battle of wills over the years with the river usually winning. I was happy to let him come through our farm and help get his tractors started, hooked up to the various implements, and tenderly hold him as he struggled to get up in the cab and in the seat. We would then follow each other around the fields, plowing, disking and harrowing the ground. Dad and I actually finished up planting his crops as his health really started to deteriorate before the stroke. The incredible part of this story is that he is 94 years old. Helping him to enjoy working the ground on his farm for probably the last time was a wonderful opportunity to learn some life lessons from a farmer and local trucker that lived his life very simply.

I am sending some pictures of him that I took this spring. When we all gather together at the farm, I don’t think we are ever really able to share or describe what paths we are wandering down each day, and I think it would really be a chance to have understanding and appreciation for where we are in our lives… ”

…This past April I made the decision to sell my truck and trailer and get out of the business for awhile. I had been running so hard for so many years and with the anticipation of Cal’s arrival, and wanting to be with the cows during calving season for the first year in many, it was an easy decision. I had a new Peterbilt that was a beautiful truck to own and drive, but very inefficent to operate, even considering my good New York freight. I felt very fortunate to have sold it when I did as I think the industry is changing so fast and that the days of the fancy classic truck that I love are over. The break from the grind of the road has been a blessing. It was so relaxing to be home with little Cal without the pressure of having to run a truck, and I feel that it has taken the past four months to really recover from the pace that I was operating on. Not having the commitment to a truck also allowed me to have the opportunity to help Burt, my 94 year old neighbor. Helping him was such an inspiration to me. Instead of sitting in a nursing home here is this old man who can hardly walk struggling to plant another crop. Observing his love of the land, his machinery, the livestock that he once raised and the companionship of a young neighbor that still has so much to learn about the joys and hardship of farming was a once in a lifetime experience.

The break from the weekly grind of trucking has also allowed dad and me to begin the process of restoring both the rock barn at the Dubuque farm and the rock house at the Hazel Green farm. Both buildings are so beautiful and have so much more long term potential and reward than any Peterbilt. For now our goal is just simply to preserve the integrity of the buildings so that further resoration will be possible. This chance to start these projects would not have been possible without selling my last truck and trailer.

As frustrated as I had become with life on the road, I still do unfortunately have a feverish love of semi-trucks. In the past month I have bought another truck and trailer and am getting ready to put it on the road. After being independent for so many years, I have realized how hard it would be to not own my own truck and be able to make the decisions that I enjoy making as a result. The difference this time is that instead of having two hundred thousand dollars tied up in equpiment, I have about thirty thousand dollars in some nice older equipment. Hopefully it will allow a balance in my life that I have not enjoyed the past few years. Although I am looking forward to making some runs to other parts of the country besides New York City, I think there is still a pretty good chance that on any given Sunday night you might see me headed down Second Avenue in Manhattan enroute to the Meat Packing District.

Calvin also sent in these photos …