This may be out of bounds because he wasnâ€™t a Chambers, but our remote in-law George Polk is honored on a recently issued commemorative stamp for WWII era reporters, along with Eric Severeid, Martha Gellhorn, and John Hersey, as well as somebody named Ruben Salazar. 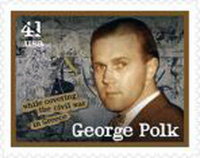 George Polk (1913-1948), born in Ft. Worth, Texas, was a cousin on the Polk side. A Naval officer in World War II, he was decorated for bravery by Admiral John McCain, the grandfather of the present senator. At Guadalcanal, with a small force of sailors, he defended an airfield under Japanese land and air attack. After the War, as a talented young CBS radio correspondent, he became known for his thorough research and tenacity. He filed hard-hitting radio bulletins from Greece describing the brutal strife that erupted there after World War II. The Greek Communist partisans were then waging a violent struggle against the conservative government supported by Britain during the War and then the Truman Administration early in the Cold War. As we might expect, Uncle Polky made his acquaintance at some point during those years. 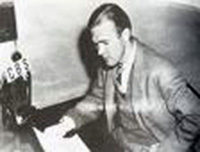 Polk was critical of both sides in that civil war. He persevered despite death threats. Polk was in Salonika, working on reports of corruption involving U.S. aid, when he disappeared. His body was found a week later, fished out of the harbor, hands and ankles bound and shot at point-blank range through the head. The exact circumstances of his death remain a mystery, and the conviction of two Greek Communists for his murder remains controversial. His fellow reporters helped to establish the George Polk Awards as a prize for the recognition of excellence in broadcast journalism in radio and television media, modeled after the Pulitzer Prize in print journalism. For more information on the Polk Awards, see the Long Island University-sponsored website:

Also you may find the following link interesting – scroll down to American Journalists at: http://www.usps.com/communications/newsroom/2007/sr07_084.htm

Thought you like to know about this illustrious relative.